It is the element that makes cool motorcycle engines and wheel rims shiny and bright, the one that  gives ruby its distinctive red color (and most American school buses their distinctive yellow one); it’s a metal with unique magnetic properties, it helps metabolize sugars and lipids and in small amounts it is essential for animal’s and plant’s  health (beware not to exceed the adequate intake, though!).

But most of all – economically speaking –  it’s the element that makes stainless steel “stainless”.

It’s chromium, not to be confused with its toxic hexavalent form – which has nothing to do with the metal used in the steel industry. 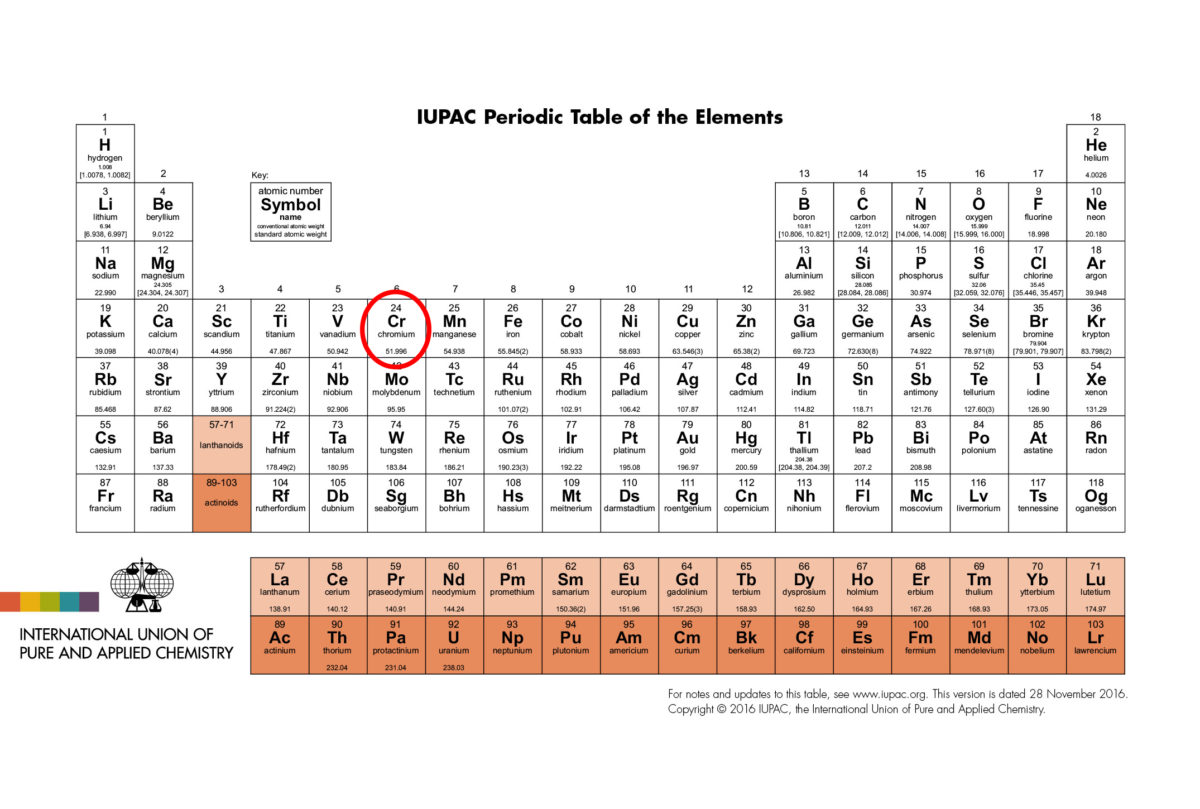 Chromium (Cr) is the first element of Group 6 (the sixth column) of the Periodic Table, a transition metal with atomic number 24, an atomic weight of 51,996 and density of 7,19 grams per cubic centimeter. It is a hard, lustrous, steel-gray metal, whose multicolored compounds – like emerald and the above mentioned ruby –  earned its name (from the Greek “chromos”, which means “color”).

Chromium is quite abundant in the Earth’s crust – ranking 22nd among the many elements the latter is composed of – and it also occurs in many minerals, but despite of that, its free metal form is almost never found in nature. Instead, chromium is mostly obtained by mining chromite, a black oxide mineral of chromium and iron (FeCr2O4). This ore and its concentrates are mostly produced in South Africa and Kazakhstan (about two fifths and one third of the total world’s production, respectively), with India, Russia and Turkey being substantial producers as well; in Europe only Finland has chromite mines.

Chromite is usually dispersed in natural deposits with a high contamination of elements like oxygen, magnesium and aluminum, or minerals like silica. That lowers the content of chromium in the ore, which commonly varies between 42 and 56 percent. Once extracted, chromite needs to be processed in order to obtain the two most commercially valuable forms of chromium: its pure metal state, or an alloy called ferrochromium. The former is obtained by first converting – through a series of passages – the chromite’s chromium content to a specific oxide (Cr2O7), and then by thermally reducing this oxide with aluminum; the latter, which is an alloy of chromium with 30 to 50 percent of iron, is produced in electric furnaces through reduction with carbon.

The industrial applications of chromium are multiple. Among those, as far as usage volume is concerned, the ones that fall within metallurgy are by far the most important.

The leading role in this field is played by ferrochromium, which is mainly used in stainless steel production. This is due to the fact that stainless steel acquires its characteristic resistance to oxidation and atmospheric corrosion through the presence of 10-26% of  chromium, which is provided by the addition of ferrochromium to the steel. On the other hand, because of the high resistance to ordinary corrosive reagents, pure chromium is extensively used as a protective coating for other metals, like cobalt and nickel, by electroplating   (i.e. layer deposition by means of an electric current).

On the whole, metal alloys account for more than 85% of the usage of chromium. The remainder is split between the use of its chemical compounds and the applications of chromite. Regarding the former, different chromium compounds are used for coloring pigments, leather tanning, cosmetics, drilling muds, catalysts or wood preservatives. As for chromite, it is used for manufacturing bricks and various devices in the refractory industry.

The many applications of chromium – especially in stainless steel manufacturing – make it a vital resource for the European economy. Currently, the EU import reliance on this metal is 75%.