“Vanadium steel, the strongest, toughest and most enduring steel ever manufactured, is used throughout the entire car”. What car? A very special one: the quote is from a 1908 advertisement for the Ford Model T, the first car ever to be produced in an assembly line. Also, the first of a series of many remarkable industrial uses of vanadium.

The extraordinary reinforcing properties of this element were already well known more than a century ago, and through time this and other characteristics have been exploited for many important applications. From spacecrafts to batteries, though little known, vanadium is ubiquitous. So let’s take a closer look at this precious element. 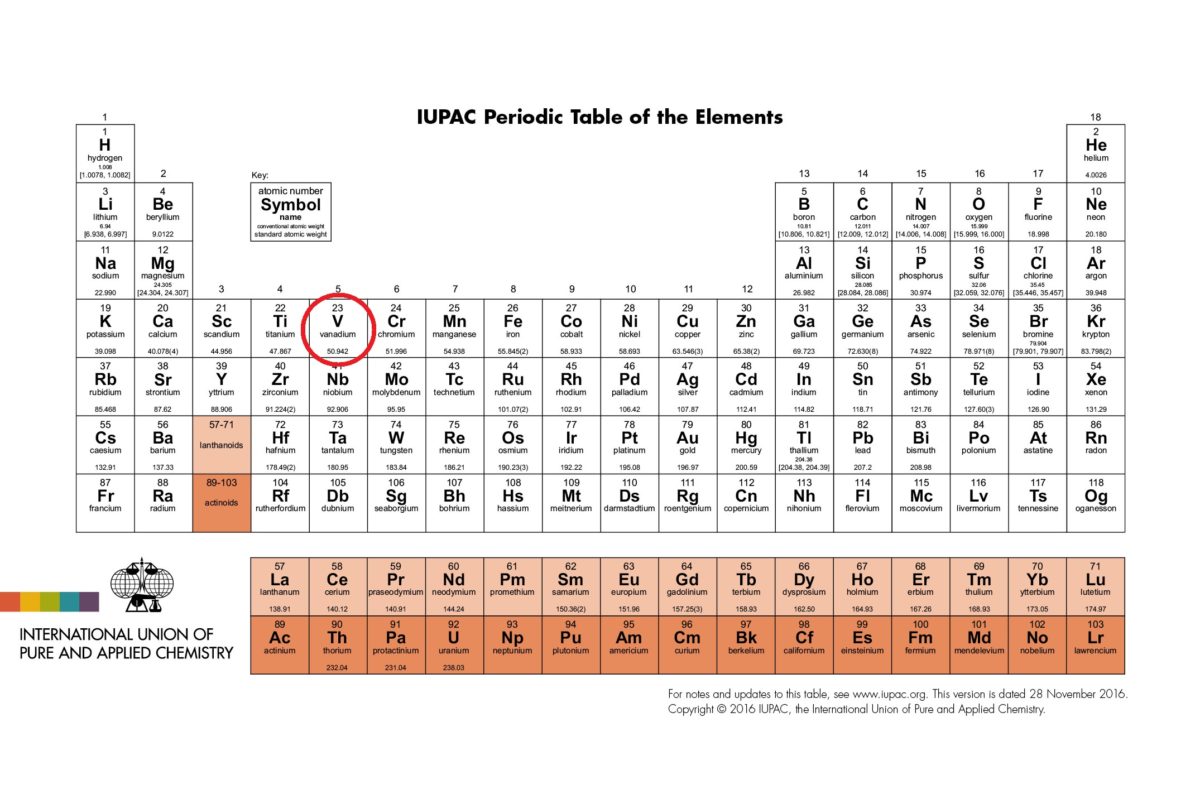 Vanadium (V) is the first element of Group 5 (the fifth column) of the Periodic Table, a transition metal with atomic number 23, an atomic weight of 50,942 and density of 6,1 grams per cubic centimeter. It is a steel-gray, shimmering, ductile and malleable metal, named after the Scandinavian goddess “Vanadis” because of its beautiful multicolored compounds.

Vanadium is rather common in the Earth’s crust, being the 20th most abundant among the many elements the latter is composed of; it is not found free in nature, but it occurs in many (ca. 65) minerals, like vanadinite, carnotite and patronite; it is also present in phosphate, bauxite and iron ores. The world’s largest mines of vanadium are from titaniferous magnetite (an iron ore) and are located in the Ural Mountains, in South Africa, and in China. However, vanadium is primarily obtained as a by-product during the production of steel. Its two industrially most valuable forms – pure vanadium powder and ferrovanadium – are produced through reduction of vanadium pentoxide (V2O5), which in turn is obtained from ores as a result of a variety of smelting, leaching and roasting processes.

By far, the largest share of the vanadium oxides production (about 80%) is used as ferrovanadium – which is an alloy of iron containing 35 to 80 percent of vanadium – or as a HSLA (High-Strength Low-Alloy) additive. Vanadium itself is soft, but when alloyed with other metals such as iron, it can  harden and strengthen them enormously: just adding 0,2% of vanadium to steel makes the latter up to 100% stronger and, also importantly, significantly lighter for many applications. Moreover, the addition of vanadium in alloys increases their resistance to corrosion. For these reasons, alloys of this element are extensively used for tool steel (e.g. axles and crankshafts), for tubes and pipes manufacturing, and in the automotive industry to make components such as hoods, door panels and piston rods. Furthermore, mixed with aluminum, vanadium is used to strengthen and promote thermal stability in titanium alloys, which are largely utilized in the aviation sector for the production of jet engines, airframes and spacecrafts. Vanadium alloys are also used in nuclear reactors because of the element’s low neutron absorption abilities and resistance to high temperature stress. When used in chemical compounds, vanadium also finds applications in dye manufacturing, in glass and ceramics production and as a catalyst in manufacturing sulfuric acid. Last but not (at all) least, vanadium has recently emerged as a useful mineral for electricity storage and battery production sectors, whose importance in a world slowly transitioning away from fossil fuels is self-evident.

The wide range of industrial applications highlight the relevance of vanadium within the EU economy. However, at present there is no extraction of this metal in the EU, which is fully reliant on the imports of its ores and concentrates.

nextWorkshop on Social Acceptance in the European Raw Materials sector