Think of a Magnetic Resonance Imaging (MRI) machine, the most powerful particle accelerator ever built and the fastest train on the globe. They all are very remarkable pieces of technology and human ingenuity, but apart from that, what do they have in common? The answer is niobium. This element is a superconductor, a material in which – below a certain critical temperature –   electricity flows with zero resistance, while the magnetic field is expelled out in a peculiar way. That is why the strong magnetic fields required by MRI devices, as well as the ones used to steer particles at the Large Hadron Collider and those which allow to keep a levitating train (the SCMAGLEV in Japan) locked to its binary at 600 kmph, are provided by superconductive magnets made of niobium alloys.

Shouldn’t that be enough to make it interesting, there are much more properties and applications to talk about in getting to know niobium. 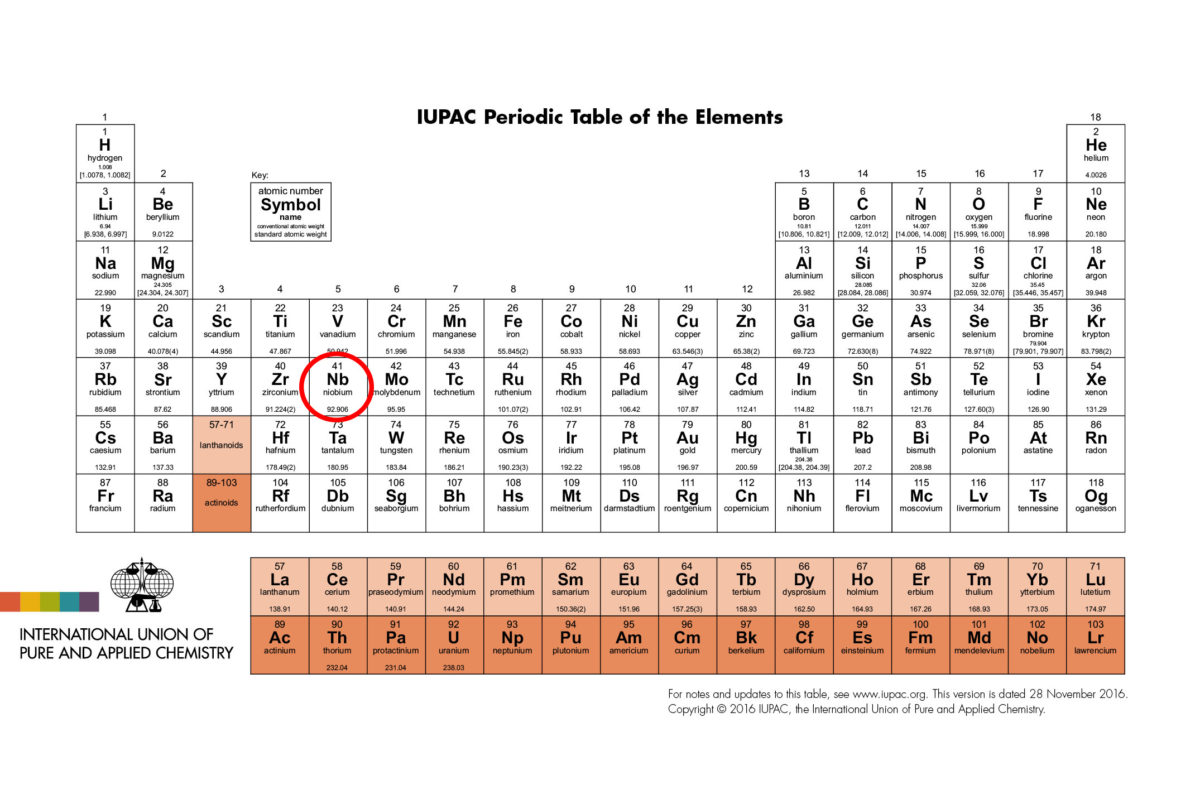 Niobium (Nb) is the second element of Group 5 (the fifth column) of the Periodic Table, a transition metal with atomic number 41, an atomic weight of 92,906 and density of 8,6 grams per cubic centimeter. It is a shiny, white, soft and ductile metal, named after Niobe, the daughter of Tantalus in Greek mythology, who turned to stone while weeping for her slain children.

Niobium is neither abundant nor very rare, being the 33rd/34th most common element in the Earth’s crust, where it occurs mostly dispersed, except for a few minerals. These are mainly niobate (FeNb2O6 – also known as columbite), tantalite (FeTa2O6) and pyrochlore – a calcium sodium niobate –, which are the principal commercial sources. Extensive deposits of these minerals are found in Brazil – which alone accounts for about 95% of the world’s pyrochlore supply – and Canada (4%), followed by a number of African countries which, together with Russia, account for the remaining 1% of the global production. With 90% and 10% figures, respectively, Brazil and Canada are also indisputable leaders in the production of ferroniobium (FeNb), niobium’s most commercially valuable intermediate product.

Once the mineral is extracted, concentration of ore is accomplished mainly by a series of crushing and grinding steps, followed by magnetic separation to remove magnetite impurities, and by de-sliming and flotation separation. Various other processing techniques may follow or complement depending on the processed materials to be obtained, which can be either ferroniobium, niobium metal, or niobium chemicals.

As mentioned above, ferroniobium is the most market-exploited form of niobium – in fact, nearly 90% of it is consumed in the production of that compound. Ferroniobium contains around 65% of niobium and represents a very important component in high strength low alloy (HSLA) steels, used to make vehicles, large structures, pipelines, bridges and ship hulls, among others. That is because using niobium to enhance steels has many benefits, such as adding strength, reducing weight, improving flexibility, increasing durability and reducing costs. Just to give an example of the added value provided by niobium, it has been calculated that adding only 300 grams of it to the steel of a medium-sized car reduces the weight of the vehicle by 200 kilograms.

If ferroniobium accounts for the greatest share of the market, the remaining 10% of niobium is used for a vast range of important applications. Going back to its superconducting properties, niobium has the highest transition temperature – the temperature below which it turns to superconductivity – among metals, which makes its alloys the most practical choice for superconductive applications, such as the ones mentioned at the beginning. Also, niobium alloys show both high corrosion and high temperature resistance, two characteristics that are widely exploited in the nuclear industry (e.g. for reactor parts) and in the space industry (e.g. for jet engines and rocket thruster nozzles). Finally, many niobium chemicals are sought after in several high technology applications. This is due to their optical, piezoelectric and pyroelectric (i.e. the ability to generate an electric charge in response to mechanical stress and heating or cooling, respectively) unique properties, which make them extremely useful for the manufacturing of, for instance, camera lenses and touch screen devices. Last but not least, let’s not forget to mention that niobium is also commonly used in making jewelry.

From vehicles to mobile phones, niobium is found everywhere around us. Unfortunately, it hasn’t been found yet under European ground. Thus, neither mining of niobium nor production of ferroniobium takes place in the EU, which is entirely reliant on imports to meet a demand of about 12.500 tonnes of ferroniobium alone per year. Furthermore, the amount of niobium physically recovered from scrap is currently negligible. Clearly the economic importance of this resource requires finding an efficient solution.